Racism stays at the forefront of 2008 election

James T. Harris is the host of the "James T. Harris Show" on Milwaukee’s radio channel 620 WMTJ. Harris appeared on CNN to speak about the various repercussions of his support for US Senator John McCain in the 2008 US presidential election. Speaking about his experiences, he has been subject to various insults from Obama supporters such as "Uncle Tom" and a "traitor". Many of the insults were from fellow African-Americans that disagree with his views. In addition, he cites that he has received numerous death threats from various people who deem him a sellout.

The following isn’t as extreme as described above. However, one wonders if a majority of African Americans truly feel this way. It’s as if that particular demographic is of the opinion that it’s time to change… The skin color of the president… and that is all that matters.

These attitudes are even more astounding when it has become more and more apparent that the Democratic Party has a Long and Shameful History of Bigotry and Racism.


I know a lot of people of different ethnicities who hold many different political views. And I can say that, at the regretful risk of appearing racist, that there are those African Americans I know who are voting based on issues. Some of them are supporting Obama and some McCain. But yet, the video of the young man above talking solely about race being the reason to support Obama is still disturbing. 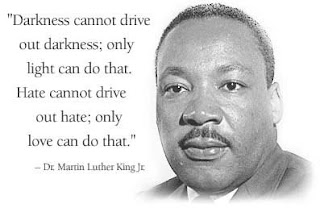 I can, in no way, ever come close to understanding what the life of an African American is like in this nation. But I do know that there are others like me, of all races, who believe that an individual’s merit and character count above skin color. And although, race should not be a viable reason to support a particular political candidate or issue, no one should ever try to discount or remove the perspective of racial consideration from someone who ostensibly considers it of great importance in how they perceive the various segments of society.

Inasmuch as I do believe Martin Luther King, Jr. preached on the character and merits of an individual to move beyond racial attitudes and actions in society, I also believe that he would have NEVER wanted anyone to forget any part of who they are, including their ethnicity… as long as it isn’t a superficial consideration.
Posted by Scott From South Cackalacky at 10/14/2008 07:17:00 AM