Association of Criminals Obfuscating the Registration of Non-persons 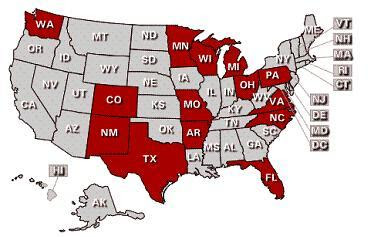 CO 2004 An ACORN employee admitted to forging signatures and registering three of her friends to vote 40 times.
2005 Two ex-ACORN employees were convicted in Denver of perjury for submitting false voter registrations.

FL 2004 A Florida Department of Law Enforcement spokesman said ACORN was “singled out” among suspected voter registration groups for a 2004 wage initiative because it was “the common thread” in the agency’s fraud investigations.

MI 2004 The Detroit Free Press reported that “overzealous or unscrupulous campaign workers in several Michigan counties are under investigation for voter-registration fraud, suspected of attempting to register nonexistent people or forging applications for already-registered voters.” ACORN-affiliate Project Vote was one of two groups suspected of turning in the documents.

MO 2007 Four ACORN employees were indicted in Kansas City for charges including identity theft and filing false registrations during the 2006 election.
2006 Eight ACORN employees in St. Louis were indicted on federal election fraud charges. Each of the eight faces up to five years in prison for forging signatures and submitting false information.
2003 Of 5,379 voter registration cards ACORN submitted in St. Louis, only 2,013 of those appeared to be valid. At least 1,000 are believed to be attempts to register voters illegally.

NM 2005 Four ACORN employees submitted as many as 3,000 potentially fraudulent signatures on the group’s Albuquerque ballot initiative. A local sheriff added: “It’s safe to say the forgery was widespread.”
2004 An ACORN employee registered a 13-year-old boy to vote. Citing this and other examples, New Mexico State Representative Joe Thompson stated that ACORN was “manufacturing voters” throughout New Mexico.

OH 2007 A man in Reynoldsburg was indicted on two felony counts of illegal voting and false registration, after being registered by ACORN to vote in two separate counties.
2004 A grand jury indicted a Columbus ACORN worker for submitting a false signature and false voter registration form. In Franklin County, two ACORN workers submitted what the director of the board of election supervisors called “blatantly false” forms. In Cuyahoga County, ACORN and its affiliate Project Vote submitted registration cards that had the highest rate of errors for any voter registration group.

MN 2004 During a traffic stop, police found more than 300 voter registration cards in the trunk of a former ACORN employee, who had violated a legal requirements that registration cards be submitted to the Secretary of State within 10 days of being filled out and signed.

PA 2008 An ACORN employee in West Reading, PA, was sentenced to up to 23 months in prison for identity theft and tampering with records. A second ACORN worker pleaded not guilty to the same charges and is free on $10,000 bail.
2004 Reading’s Director of Elections received calls from numerous individuals complaining that ACORN employees deliberately put inaccurate information on their voter registration forms. The Berks County director of elections said voter fraud was “absolutely out of hand,” and added: “Not only do we have unintentional duplication of voter registration but we have blatant duplicate voter registrations.” The Berks County deputy director of elections added that ACORN was under investigation by the Department of Justice.

TX 2004 ACORN turned in the voter registration form of David Young, who told reporters “The signature is not my signature. It’s not even close.” His social security number and date of birth were also incorrect.

VA 2005 In 2005, the Virginia State Board of Elections admonished Project Vote and ACORN for turning in a significant number of faulty voter registrations. An audit revealed that 83% of sampled registrations that were rejected for carrying false or questionable information were submitted by Project Vote. Many of these registrations carried social security numbers that exist for other people, listed non-existent or commercial addresses, or were for convicted felons in violation of state and federal election law.

In a letter to ACORN, the State Board of Elections reported that 56% of the voter registration applications ACORN turned in were ineligible. Further, a full 35% were not submitted in a timely manner, as required by law. The State Board of Elections also commented on what appeared to be evidence of intentional voter fraud. "Additionally,” they wrote, “information appears to have been altered on some applications where information given by the applicant in one color ink has been scratched through and re-entered in another color ink. Any alteration of a voter registration application is a Class 5 Felony in accordance with § 24.2-1009 of the Code of Virginia."

WI 2004 The district attorney’s office investigated seven voter registration applications Project Vote employees filed in the names of people who said the group never contacted them. Former Project Vote employee Robert Marquise Blakely told the Milwaukee Journal Sentinel that he had not met with any of the people whose voter registration applications he signed, “an apparent violation of state law,” according to the paper.
Posted by Scott From South Cackalacky at 10/22/2008 03:14:00 PM