Here's a stimulus success story: In Arizona's 9th congressional district, 30 jobs have been saved or created with just $761,420 in federal stimulus spending. At least that's what the Web site set up by the Obama administration to track the $787 billion stimulus says. 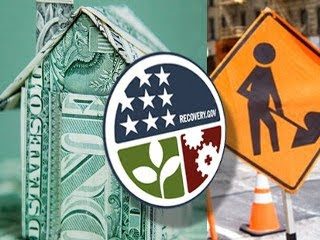 In Connecticut's 42nd district (which also does not exist), the Web site claims 25 jobs created with zero stimulus dollars.

The list of spending and job creation in fictional congressional districts extends to U.S. territories as well.

Interesting facts and figures, but none of these districts exist.

The recovery.gov Web site was established as part of the stimulus bill "to foster greater accountability and transparency" in the use of the money spent through the stimulus program. The site is a well-funded enterprise; the General Services Administration updated it earlier this year with an $18 million grant.
Posted by Scott From South Cackalacky at 11/16/2009 07:49:00 PM 6 comments: