A few years ago, Tom Brokaw has a segment on NBC News called “The Fleecing of America.” Well, now that fleecing starts hard core!

Please understand that it is not my intention to force you to sit through this entire thing unless you feel like being a glutton for liberal lies and rear-end raping. However, this was the only clip I could find with what I wanted you all to hear. 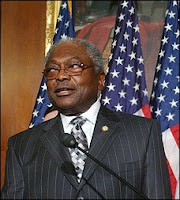 One of my state Representatives, Jim Clyburn, D-SC, the House Majority Whip, gave props to several democrats involved. The thing that struck me was someone’s urging him to mention a name of someone who isn’t even in the House of Representatives. And that this person be given leadership credit. So pay attention to the following time indices and Dow numbers:

At about 08:40, a female voice urged Clyburn to mention Barack Obama. This was to ensure that his messiahness would be revered as the leading “executive” on this issue. What a shock of crit!!!

Of course Clyburn was going to mention Obama, but obviously the libturd pawns of the Oompelosi didn’t have confidence from her so that his messiahness would get presidential brownie points.

The Dow dropped 84.56 points during the Democrats announcement.

Now the question I have is: What exactly did Barack Obama do to lead the House in this. I though Nancy Pelosi was their leader there. Can anyone please comment and tell me what Obama did that made such a big difference in the vote.

Barack Obama himself said, in a recent interview, that he wouldn’t have sway with any GOP Congressional members, so how could he have led the House.

Barack is supposed to be the one that unites this country for change. Well, a loss of 84.5 points on the Dow in TEN MINUTES is not the change I want from Congress or its exalted leader, Barack Hussein Obama.
Posted by Scott From South Cackalacky at 10/05/2008 12:40:00 AM

Well Scott, It's quite simply how the Monk's use the power of the "O" Word in their great Meditation "OHM" "OHM" With the Democrats that "O" Word is "Obama" "Obama" LOL