"Investor's Business Daily, a great editorial today on the Obama health care plan passed by the House of Representatives. How many of you have heard President Obama say, "Hey, if you like your plan, if you like your doctor, you'll get to keep 'em"? "It didn't take long to run into an "uh-oh" moment when reading the House's 'health care for all Americans' bill. Right there on Page 16 is a provision making individual private medical insurance illegal. When we first saw the paragraph Tuesday, just after the 1,018-page document was released, we thought we surely must be misreading it. So we sought help from the House Ways and Means Committee. It turns out we were right: The provision would indeed outlaw individual private coverage. Under the Orwellian header of 'Protecting The Choice To Keep Current Coverage,' the 'Limitation On New Enrollment' section of the bill clearly states: 'Except as provided in this paragraph, the individual health insurance issuer offering such coverage does not enroll any individual in such coverage if the first effective date of coverage is on or after the first day' of the year the legislation becomes law." 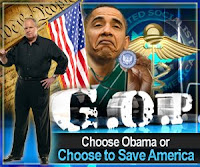 So after this bill becomes law, nobody in the insurance business can offer anybody and you can't buy private medical insurance. "So we can all keep our coverage, just as promised -- with, of course, exceptions: Those who currently have private individual coverage won't be able to change it. Nor will those who leave a company to work for themselves be free to buy individual plans from private carriers." You will have to go to the public option. "From the beginning, opponents of the public option plan have warned that if the government gets into the business of offering subsidized health insurance coverage, the private insurance market will wither." And you don't need to be an expert to understand this. The government can print money, it doesn't have to make a profit. Private sector people do or they go out of business. So you can't compete with somebody who's not worried about profit.

"Drawn by a public option that will be 30% to 40% cheaper than their current premiums because taxpayers will be funding it, employers will gladly scrap their private plans and go with Washington's coverage." We also know this. We know that many companies are looking very forward to off-loading their health care expenses to the government. "The nonpartisan Lewin Group estimated in April that 120 million or more Americans could lose their group coverage at work and end up in such a program. That would leave private carriers with 50 million or fewer customers. This could cause the market to, as Lewin Vice President John Sheils put it, 'fizzle out altogether.' What wasn't known until now is that the bill itself will kill the market for private individual coverage by not letting any new policies be written after the public option becomes law. The legislation is also likely to finish off health savings accounts." Do you know HSAs are dead? And the reason health savings accounts are dead is because you have control.

This is something that Obama and his cronies want to get rid of, and it's in the legislation. Democrats have wanted to get rid of health savings accounts for years. They want to get rid of that because nothing gives individuals more control over their Medicare and the government less than health savings accounts. It took Investor's Business Daily just 16 pages of reading the health care bill, over a thousand pages, to find this naked attempt by the political powers to increase their reach. So that's page 16, and they wonder what other horrors await us as we read the additional 1,002 pages here. So the day this private option becomes law nobody can buy and nobody can sell individual, private coverage. (interruption) Well, that's a good point. Obama has said, no, we need to offer this competition. We need to compete. The government competing, and they're already over a thousand insurance companies in competition out there. The governor, well, we need to really put pressure on them.

So the way they're going to put pressure on them is put them out of business. It's a horror story. It really is. This is why they're trying to push this through, folks, this is why they're trying to get all this done 'cause they know their buds in the State-Run Media are not gonna report this to you. This is not going to be told. Now, this is interesting from the Dow Jones News wire just now: "U.S. Rep. Mike Ross, D-Ark., a leader of fiscally conservative House Democrats, said Wednesday a House plan to overhaul the U.S. health-care system is losing support and will be stuck in committee without changes. 'Last time I checked, it takes seven Democrats to stop a bill in the Energy and Commerce Committee,' Ross told reporters after a House vote. 'We had seven against it last Friday; we have 10 today.' Three House committees are slated to begin considering the $1 trillion-plus bill this week, but the Energy and Commerce looms as the biggest challenge. That's because it counts among its 36 Democratic members seven members of the Blue Dog Coalition," conservative Democrats that are opposing House Democrats' efforts in general on health care.

Mike Ross said that the bill doesn't include provisions adequate to curb rising health care costs including what the government spends on health care. So he says that his committee has the votes to block it. Yeah, well, he might think so, but he hasn't gotten a phone call from Rahm Emanuel yet. This really is going to be, I have to think, the overreach, the tipping point 'cause the Republicans can't stop this. Not with their votes. They might be able to do it in other ways. It's called television ads. I mentioned this chart in the New York Post earlier on the tax rates and what it's gonna cost various income levels in New York City where the top rate will go to 58%. And somebody at $80,000 a year in New York City will pay an effective 36% of their income in taxes. That New York Post chart, that graphic, I said, "If every newspaper in the country would put one of these together." Screw waiting on the newspapers, this is what the RNC ought to. Michael Steele ought to get busy getting some people to go to every major city and put this chart out and get it out in every city, what Obama health care is going to cost you, family of four, this income group, this income level.

You know, the Republicans have put together a pretty good flow chart to show the bureaucracy, but it's complicated. The numbers are what people will understand. How much it's going to cost them above and beyond what everything costs them now. Seventy-seven percent of the American people are happy with their health care. When they find out how much this reform is going to cost them, it could be killed. It's time to choose. Yesterday we said it. Got a great caller on this, said it's time to choose up here. Republican Party needs to put aside these little petty arguments over how they're going to go out and get that group to vote for them and that group and so forth. This is standing up for America and doing so, standing up for our traditions and our founding, standing up for the institutions and traditions that made and define our greatness. That's where their electability resides. That's where their reelectability is. Not in cherry picking votes from various groups with mindless little policy twitters.
Posted by Scott From South Cackalacky at 7/16/2009 05:50:00 PM

It is time to call and email your congressman and let them know that there are entrepreneurs who are addressing the costs of healthcare. For example, www.myHSArewards.com is a cash rewards program that helps individuals contribute more money to their Health Savings Accounts simply by shopping with its network of nearly 300 merchants. Also, www.NewChoiceHealth.com helps find the best price on healthcare procedures. Another is www.DestinationRx.com helps with finding the best prices on pharmaceuticals.

Let the American entrepreneurial spirit work this out not the government.

What health care, we're getting blown out by Italy? How did that happen? Why are we 37 if our health care is so good? People talk of the entrepreneurial sprit fixing the problem? Who might that entrepreneur be, a corporate gargantuan like Aetna? The big boys want you to believe they’re just Mom and Pop working to lower your cost. Lower your coverage maybe but that’s it. In 2008 alone 60% of all Bankruptcies in America were do to medical bills and yet they’re zero in every other western economy

I am not sure what kind of health situation you and your family have. I am blind with a hereditary ocular condition that is currently untreatable. My wife is also legally blind, has Rheumatoid Arthritis, Lupus, Severe Asthma and COPD, and has Parkinson's Disease. She is also a two time cancer survovor. If we lived in Italy, she would already be dead. So your argument is quite devoid of value in terms of medical reality.
Yes, patients and doctors both have been taken advantage of by unscrupulous people. And there are situations where neighborhood economics play a negative role in healthcare. But WHY would we try to be like the following?

Copy and paste the following into your browser
http://www.youtube.com/watch?v=X_Rf42zNl9U