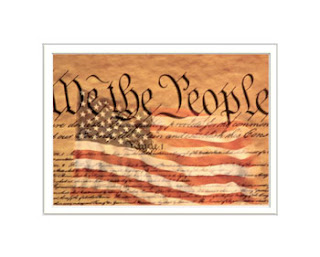 The following is an interpretation and follow up to A Godless Constitution?: A Response to Kramnick and Moore by Daniel L. Dreisbach and David Barton’s American Heritage Series: Our Biblical Constitution episode.

There are so many who blindly claim that God had nothing to do with the U.S. Constitution or our government. We’ve already seen that the considerations of and to the God of the bible were very much a part of the formation of the federal government. And that each and every state in the union gives glory to God in its constitution.

So yet again, we must look at some facts regarding the proof of God’s direct influence in our nation.

Of all of the sources that our founding fathers used to quote political ideals, University of Houston political historians have analyzed 15,000 writings of our Founding Fathers. 3,154 quotations and sources made or referenced by the founders reveal that the bible was quoted most by those founders at 34% (This was more than the next three highest sources – Montesuqieu, Blackstone and Locke – combined).

George Washington and Alexander Hamilton both confirmed that the separation of powers in our government is based on a bible verse that was a subject of many sermons during the founding era - Jeremiah 17:9 – “The heart is deceitful above all things, and desperately wicked: who can know it?” This meant that human will and emotion could be uneven and should not be trusted alone. And in government, total power given to one person or group in government would be the same way.

Specifically from the Constitution:

Article I, Section 8 – Uniform Immigration Laws – “To establish a uniform rule of naturalization, and uniform laws on the subject of bankruptcies throughout the United States” has its roots in Leviticus 19:34 – “But the stranger that dwelleth with you shall be unto you as one born among you, and thou shalt love him as thyself; for ye were strangers in the land of Egypt: I am the LORD your God.” To be sure, this is regarding LEGAL IMMIGRATION because deceptiveness in immigration would violate God’s commandments.

Article II, Section 1 – President must be natural born citizen – “No person except a natural born citizen, or a citizen of the United States, at the time of the adoption of this Constitution, shall be eligible to the office of President; neither shall any person be eligible to that office who shall not have attained to the age of thirty five years, and been fourteen Years a resident within the United States” has its roots in Deuteronomy 17:15 – “Thou shalt in any wise set him king over thee, whom the LORD thy God shall choose: one from among thy brethren shalt thou set king over thee: thou mayest not set a stranger over thee, which is not thy brother.”

Article III, Section 3 – regarding witnesses and capital punishment – “Treason against the United States, shall consist only in levying war against them, or in adhering to their enemies, giving them aid and comfort. No person shall be convicted of treason unless on the testimony of two witnesses to the same overt act, or on confession in open court” can be attributed to Deuteronomy 17:6 – “At the mouth of two witnesses, or three witnesses, shall he that is worthy of death be put to death; but at the mouth of one witness he shall not be put to death.”

Article III, Section 3 – Provision against attainder – “The Congress shall have power to declare the punishment of treason, but no attainder of treason shall work corruption of blood, or forfeiture except during the life of the person attainted” come from Ezekiel 18:20 – “The soul that sinneth, it shall die. The son shall not bear the iniquity of the father, neither shall the father bear the iniquity of the son: the righteousness of the righteous shall be upon him, and the wickedness of the wicked shall be upon him.”

Article IV, Section 4 – Republicanism (elections at local, county, state and federal levels) – “The United States shall guarantee to every state in this union a republican form of government” is derived from the concepts in Exodus 18:21 – “Moreover thou shalt provide out of all the people able men, such as fear God, men of truth, hating covetousness; and place such over them, to be rulers of thousands, and rulers of hundreds, rulers of fifties, and rulers of tens” Furthermore, Noah Webster, who was personally responsible for Article I, Section 8, Paragraph 8 specifically cited Exodus 18:21 – “Let it be impressed on your mind that God commands you to choose for rulers just men who will rule in the fear of God [Exodus 18:21]... [I]f the citizens neglect their duty and place unprincipled men in office, the government will soon be corrupted... If [our] government fails to secure public prosperity and happiness, it must be because the citizens neglect the Divine commands, and elect bad men to make and administer the laws.”

The idea of tax exemptions for churches comes from Ezra 7:24 – “Also we certify you, that touching any of the priests… or ministers of this house of God, it shall not be lawful to impose toll, tribute, or custom, upon them.”

John Jay and George Washington, among other founders, frequently attributed religious causes as the basis for elections of American leaders.

In the constitution, there are various other clauses connected to the God of the bible:

Article I, Section 7 contains the Sundays Excepted clause. This was placed in reverence and respect for the day that gives recognition to Resurrection Day.

The four oath clauses mentioned are to be taken as seriously as that of Numbers 30:2 – “If a man vow a vow unto the LORD, or swear an oath to bind his soul with a bond; he shall not break his word, he shall do according to all that proceedeth out of his mouth.”

At the conclusion is the “In the Year of our Lord” clause. The framers placed it here as a very specific homage to the fact that they were living in a time of Christ. To merely put a date down would cover the requirement for time reference. But the framers knew to give glory to the reign of our Lord and Savior and sovereignty to God Almighty.

In 1854, Congress even acknowledged the significance of the role Christianity played in the formation of our nation:

“Had the people, during the Revolution, had a suspicion of any attempt to war against Christianity, that Revolution would have been strangled in its cradle... In this age, there can be no substitute for Christianity... That was the religion of the founders of the republic and they expected it to remain the religion of their descendants.” – Reports of Committees of the House of Representatives Made During the First Session of the Thirty-Third Congress (Washington: A. O. P. Nicholson, 1854), pp. 6-9.

And in 1892, the Supreme Court even reaffirmed this:

[N]o purpose of action against religion can be imputed to any legislation, state or national, because this is a religious people. This is historically true. From the discovery of this continent to the present hour, there is a single voice making this affirmation... There is no dissonance in these declarations. There is a universal language pervading them all, having one meaning. They affirm and reaffirm that this is a religious nation. These are not individual sayings, declarations of private persons. They are organic utterances. They speak the voice of the entire people. - Justice Brewer; Holy Trinity Church v. U.S., 143 U.S. 457 (1892)

Our constitution is an amazing document that has been the longest lasting government document of legal record in history. It is no coincidence that so many biblical principles are indelibly evident.

For you non-Christians out there, don’t be so ready to get rid of God’s influence in government. After all it is only a real and true God that would allow freedom of religion.

Worship how you wish, or even not at all, but please understand that just because you do have that freedom, it doesn’t mean that you are the only ones that have it.