What's in a name? God knows.

We learned something incredible in Sunday School, and even with all of the election stuff going on, I haven’t been able to drop this. So I thought I’d put it down.

Let me start of by stating that I take no credit for any of this information. I honestly can’t give sources as they weren’t given to our class on Sunday.

My only prayer is that I am doing honor and giving glory to God in this presentation and that it be only as accurate as God directs me to impart.

Apparently, there are a ton of people I owe a big apology to. I cannot stand for anyone to say GD or JC without thought to the Creator of the Universe, or to use the name of that Creator as a curse word. I still believe it brings dishonor and displeasure to the LORD when we misuse those names. HOWEVER, my animosity towards this practice no longer comes from one of the Ten Commandments.

Nope, I am not disregarding one of God’s laws. However, there is a new understanding of what the Third Commandment actually means.

“Thou shalt not take the name of the LORD thy God in vain; for the LORD will not hold him guiltless that taketh his name in vain.” KJV

One of those “thou shalts” that even has a “taketh.” Okay, let’s look at another translation.

“You shall not use or repeat the name of the LORD your God in vain [that is, lightly or frivolously, in false affirmations or profanely]; for the LORD will not hold him guiltless who takes His name in vain.” AMP

This is a little better and even has that part about profanity, but let’s look at a more apropos translation.

"You must not use the name of the LORD your God thoughtlessly; the LORD will punish anyone who misuses his name.” NCV

Don’t use it thoughtlessly.

But use what thoughtlessly? God is a title after all and not a name. Did you notice that the word “lord” was in caps in each passage?

It’s the NAME of the LORD that is important here. We are supposed to pray in the “Name of the Lord.” But what is the actual name of the Lord?

When Moses meets God at the burning bush, the question of God’s name comes up:

This is one of the first verse in which the name of God was first mentioned. Translations include Elohim, Eloi, Jehovah, Adonai, and of course “Yahweh.”

Whenever the word ‘lord” is capitalized, it was usually substituted from the original Hebrew symbols for YHWH (of course, Hebrew is written backwards from English). Eventually the Greek translation added vowels and the pronunciation became YAH-weh. This is where the thoughtless use of the name comes into practice. I mean this by stating that the Greek letters we see as consonants were translated from Hebrew vowels. 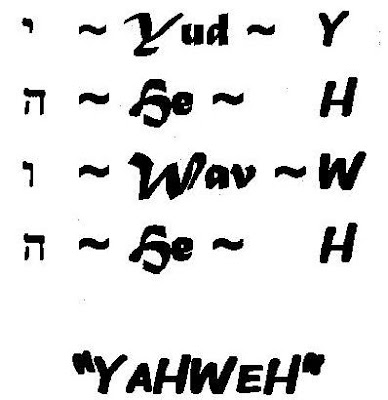 But going back to Genesis, let’s look at what God did when He created man:

“And the LORD God formed man of the dust of the ground, and breathed into his nostrils the breath of life; and man became a living being.” - Genesis 2:7 NKJV

The Lord spoke His name when He gave man life.

Furthermore, let’s go back just a little further in Genesis:

“So God created man in His own image; in the image of God He created him” – Genesis 1:27 NKJV

When you place the original Hebrew letters from top to bottom…

The Name of the Lord is the image of a man. And since we were made in His own image…

Every breath we take speaks His name and every thing we do is seen as His name.

Thank God for His Son, Jesus!