I am, of course, reluctant to accept that someone so different in political ideology from me has been elected to the highest post in the world.

However, as much as I decry an Obama presidency, I also celebrate this great nation. The people voted, the populace chose, the constitutionality of the Electoral College (even though not expedited yet), will be fulfilled. And a new leader of the free world, commander-in-chief, high executive has been called to service in the most peaceful transfer of governance of the greatest nation in the history of the world.

What’s more is that it IS an incredible testimony that an American of African ancestry has been elected… popularly and constitutionally.

And now that an African American has been chosen as the president-elect, there is no excuse for ANYONE of ANY race not to strive for the best this nation has to offer. There can be no circumstance preventing the pursuit, and not the gift, of happiness.

That holds value to me as a patriot.

I still do not trust that he will not lead us into a path towards socialism and that is unacceptable.

I still believe that he will fulfill every radical promise he made as that far left guy campaigning during the primaries.

I still believe that he doesn’t truly grasp the accountability and responsibility that he has been chosen to undertake.

We failed conservatism and by doing that we have failed our country.

There are some of you who have said that it took a Jimmy Carter to get a Ronald Reagan. And even though the merits of that statement are reassuring to us in the hopes for the future, they mean nothing without conservatives willing to stand up and take action for that future. And they mean nothing if there isn’t anything left of this nation for a true conservative in the mold of Reagan to be nominated.

The election this year started something WE have got to continue. AND GOOD RIDDANCE! Conservatives have got to vote out those RINOs and ConWans who are compromising our nation by trying to appease all people.

If we want someone in the mold of Ronald Reagan, we have to work hard to show that conservatism is in the nation’s best interest for all people.

We have to act like conservatives who are proud Americans. We have to work in and of ourselves to show our fellow Americans that personal responsibility and accountability ARE the pursuit of happiness.

Frankly, John McCain did not inspire that. Yes, he is known for reaching across the aisle. But that is the crime of conservatism compromised. McCain would compromise to the left. The thing that made Reagan a great president of unity was that the compromise involved him getting the other side to reach across the aisle to work with him.

McCain chose to play it safe in the hopes of reaching independents. He took the conservative vote for granted before and after Sarah Palin was chosen as his veep pick.

And no, Sarah Palin shoulders no blame for this loss. Although, I am sure she would certainly hold herself accountable. But she was what brought conservative back into the GOP campaign. She is not perfect, folks, and there were so many that held her to an even higher standard than perfection. When she had a minor blemish, it was portrayed as a gaping and festering wound. Palin is an everyday American woman who was thrust into the national spotlight. Her political rise is one that can be compared to John Adams or Harry Truman. In my humble opinion, that is good company!

So congratulations, Mr. President-elect! You are what the American people wanted. We’ll see how long that lasts. I will pray for you when I pray for this country. And one of my prayers will be that God preserve this nation in spite of your presidency. 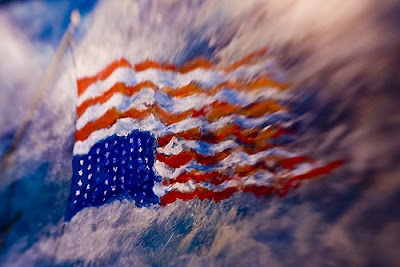