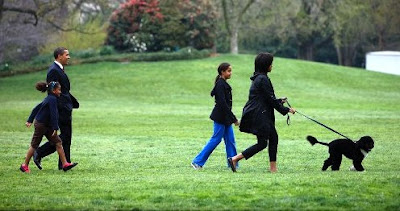 With all of the problems this nation is facing, dogs are at the top of the political foray for the presidency.

So, let’s take a good look at the importance of famous presidential dogs:

Teddy Roosevelt’s Bull Terrier, Pete, was so notorious for biting that he was banished from the White House/

FDR’s Scottish Terrier, Fala, was present at many of the most important meeting between international leaders that he probably was able to ignore the extra-maritals committed by #32.

LBJ liked to lift his Beagles up by their ears. Surely fun for Him and Her!

Gerald Ford’s Golden Retriever, Liberty, who had a litter of pups, had to train them to be very wary around tumble prone #38.

Reagan’s Cavalier King Charles Spaniel was the first to hold the title of “First Dog.”

Bush, the Elder’s Springer Spaniel, Millie, who liked to snap at the press – I REALLY LIKED THIS DOG.

W’s Scottish Terrier, Barney, who strode proudly along side #43 after 9/11.

And Bo, Barack Obama’s gift to his daughters for their patience and good behavior during his 2008 campaign.

These are only a few but there are goodies and baddies among them all. But now dogs are the focus of the actual campaign. Anyone else old enough to remember who Checkers was?